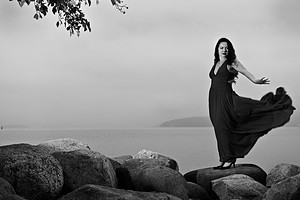 Rachel’s debut CD, Cosmophony, has been praised as “brilliant” and “unforgettable” (Vancouver Sun) and for “the passion, intensity and the nuanced playing she's acclaimed for... she manages to instill a sense of dynamic tension and pull to every note" (The Province). Rachel was a co-founder of the Queer Arts Festival in Vancouver, recognized as one of the top 5 festivals of its kind worldwide.